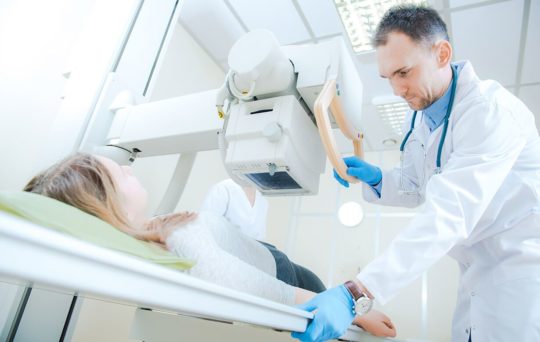 An ultrasound scan uses high-frequency sound waves to make an image of a person’s internal body structures. Doctors commonly use ultrasound to study a developing fetus (unborn baby), a person’s abdominal and pelvic organs, muscles and tendons, or their heart and blood vessels. Other names for an ultrasound scan include sonogram or (when imaging the heart) an echocardiogram.

The ultrasound machine directs high-frequency sound waves at the internal body structures being examined. The reflected sounds, or echoes, are recorded to create an image that can be seen on a monitor. The sound waves are emitted and received from a small, hand-held probe. The high frequency of the sound means the human ear cannot hear it – which is why it is called ultrasound.

An ultrasound scan is usually non-invasive (done from outside the body). However, some scans are done with a special probe that is inserted into the person’s vagina (for some obstetric or pelvic examinations), rectum (for some prostate examinations) or oesophagus (for some heart examinations). Sometimes, doctors will use ultrasound scanning to monitor and guide invasive procedures like a biopsy of a person’s breast or thyroid gland.

Doctors commonly use ultrasound for procedures such as:

Some ultrasound examinations require special preparation beforehand, such as:

You will need to ask your doctor or the ultrasound department if you need to do any special preparation before your scan.

If you are having an upper abdomen ultrasound, you will need to lie down on an examination table or bed. The ultrasound technologist, known as a sonographer, will place some gel onto your skin to provide better contact between your body and the ultrasound probe. They will then place the hand-held probe on your skin above the area of your body, organ or tissue that is being studied.

The two-dimensional (or sometimes three-dimensional) pictures are shown instantly on a monitor.

Other types of ultrasound may need a slightly different procedure. For example, a woman undergoing an investigation of her pelvis may have a transvaginal scan, which involves inserting a special ultrasound probe into the vagina rather than (or as well as) scanning through the front of the pelvis.

Immediately after an ultrasound scan

An ultrasound scan usually takes around 20 to 40 minutes, depending on the type of examination. After the procedure, the sonographer will give you paper towels (or something similar) to wipe off the gel. You can then get dressed. The results of the ultrasound scan are usually sent to your doctor, so you will have to make a follow-up appointment with them to get the results.

Most ultrasound scans are non-invasive and the procedure does not involve the use of ionising radiation such as x-rays. Ultrasound scans for pregnant women are now considered routine in Australia.

Taking care of yourself at home after an ultrasound scan

The ultrasound scan itself should not cause you much pain, if any, and is generally non-invasive, so you don’t need any recovery time. Most people can go about their normal business once they have finished the ultrasound examination.

Long-term outlook after an ultrasound scan

Treatment – if any – depends on the reason for your scan. For example, fibroids detected during a scan may be surgically removed (myomectomy), shrunk with medications or simply monitored. Other conditions detected by an ultrasound scan, such as abdominal masses, may need further tests or exploratory surgery.